Pyin Oo Lwin is located at the high altitude, it is popular as a summer resort in Myanmar. The temperature in daytime, it is not hot, around 28 degrees, but sunshine is so strong, please pay attention about the Sunburn. Myanmar is under the equator.

As the temperature it is about 15 degrees after sunset and fell cold at the night. we recommend that you have a long sleeve jacket etc.
In addition, the city is also very beautiful, especially the Myanmar Botanical Garden(NationalKandawgyi Park) is the famous park in Myanmar. The park is really beautiful and big. The park needs an entrance fee, USD 5.
Mandalay has many high lights places, but if you have time, why do not you go to Pyin Oo Lwin and Gok Hteik Bridge and Hsipaw???

How to use the Map 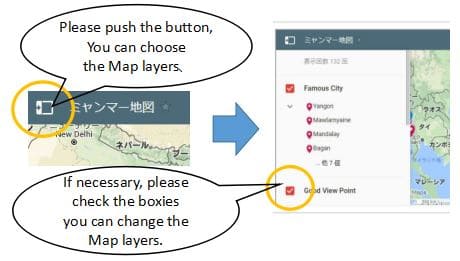 Pyin Oo Lwin is know as the summer resort in Myanmar. The highest temperature is 28 degrees, After sunset, the temperature is getting down and feel cold. In the night, it is 15 degrees so please take a jacket or something.

How to get to Pyin Oo Lwin

By Highway Bus or Mini-Ban are popular going to Pyin Oo Lwin, and taking a time for 2 or 3 hours. From Mandalay to Pyin Oo lwin , there are many buses so it is easy to get to there.
Threre is a railway, but the departure is early in the morning, and taking a time for 4 or 5 hours, because the term has to go throgh mountains area. Almost people use by bus.
It is possible to go to a rental motorbike from Mandalay, but please take care, because the way is in mountains area, and has many slopes and Toppling over.

And some tourists go to Pyin Oo Lwin after going to Gok Hteik Bridge and Hsipaw.

I do not recommend you to use the railway, because taking a time around 8 hours from Mandalay to Pyin Oo Lwin, and the departure is just one line and early in the moning, 4am. The reason of taking a time for 8 hours that the train goes through in the mountain area. If you go to Pyin Oo Lwin by the train, you need to go to the Mandalay station to book. and buy the ticket.