And if you have a time, I recommend you to stay in Pyin Oo Lwin, (Old Name : Maymyo). You will get off this trayin from Hsipaw and Gok Hteik Bridge.

How to get to Gok Hteik Bridge & Hsipaw

It is the second highest iron bridge in Myanmar. It is surprised that there is The world second highest iron bridge in Myanmar. The bridge was made by Britain in 1903. The location is between Mandalay and Shipoh. It is subtle whether the bridge is repaired, but it is a famous tourist spot of Myanmar.
The way to get from the Mandalay to Shipoh by a Mini-Van taxi, and stay one night in Hsipow. You get on the train from Hsipaw Station next morning, and go through The Gok Hteik Iron Bridge.

Going through the Gok Hteik Iron Bridge, you better to get off the train at Pyin Oo Lwin Station (Maymyo Station), and come back to Mandalay by the Minibus or Bus or stay one night in Pyin Oo Lwin(Maymyo). 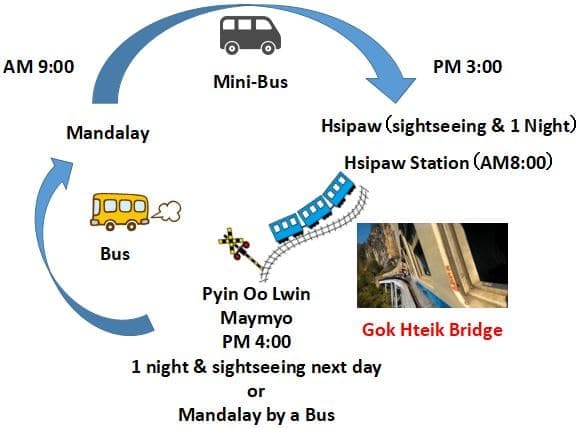 Or you go to Pyin Oo Lwin and stay one night, you can take a train from Pyin Oo Lwin to Gok Hteik Bridge and Hsipaw. Of coure, you have to stay in Hsipaw, too.

How to use the Map