How to Travel in Bagan

Blue marks on the map above are all pagodas. Tel you the truth, there are too many pagodas in Bagan. There are too many highlights. I do not know where the pagoda is. So it is impossible to write everything, and if you write it will be a tremendous amount. So, it is recommended to go around,

As Bagan has a nice view, most of the pagodas standing in the wilderness can be seen if you are running on an electric motorcycle.

We think that it is good to go to Pagoda who was interested while running on the electric motorbike.

There are lots of major pagodas, but I will mention the recommended places among them, so you will find a pagoda that you will notice when you are running on the electric motorcycle, so it is better to take a walking way I think. Bagan also has Old Bagan, New Bagan. Most of the pagodas are in Old Bagan.

How to travel in Bagan is pelase see the figure belowGreen、Blue、Red. Driving along the big street, you can see the major pagodas. It would be nice to see it by the pagoda you cared about. 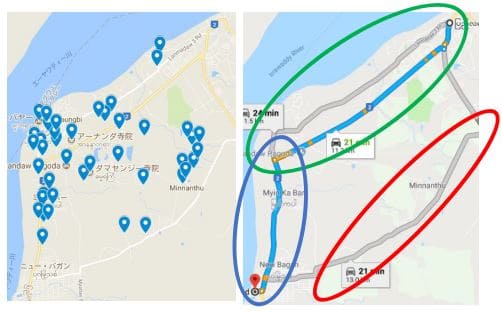 In Bagan, electric bicycle, E-Bike is mainly used, so you can sightseeing for ease. Until a few years ago it was a normal bicycle, and at that time I had a very hard feeling. Bagan has many gentle slopes, going always goes up, return is always going down, but using E-Bike is no problem. 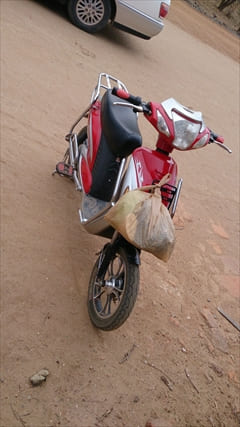 Bagan can also run with a horse-carriage carriage, but it is not confortable, and a little smell … However, there is a different taste of turning around with a horse carriage. Those who have never got on, I think I should try it once.